Getting the marketing piece rolling as a self-published author takes a lot of planning and work. I’ve never tried this before, but I decided to do a little experimentation this time around the release of my second published novel, Withered World.

The first thing I learned is: Planning is everything. And even then, things don’t always go according to plan. Nothing proved this more than while navigating the Amazon publishing tools. The tools themselves are pretty straightforward, but I had a small slip-up getting the print book officially set to go. Apparently, there is no pre-order option for print books like there is for e-books. So once, the print book was approved, it was live. The trouble is, it was live before my ebook was scheduled to go live. It’s almost like having twins when one is born today and the next one comes after midnight! But, two birthdays isn’t so bad, right? And it’s not like there’s much to be done about it. Last time around, my print version wasn’t ready until after the ebook released, so I didn’t run into this issue.

Trying Out Ad Buying
To dip my toes in the world of marketing myself, I made very small budgeted ads for Amazon and Facebook (I planned to just hashtag and post at random on Twitter).

Overall, the ad buying process on Amazon and Facebook is relatively easy. But, I discovered that Amazon works more in the frame of AdWords and thus didn’t feel like it was the greatest value for my money until I looked at the number of impressions I received. Basically, you have to bid on how much you’re willing to pay to show up in relation to your specified ad words. It seems futile to step into that ring on a limited budget.

On a more positive note, their ad system forced me to write compelling copy in a very short space to really sell my book to potential readers. You can see what came out of that exercise below. I had some help from my boyfriend. I’m really pleased with what came out of our brainstorm and I was able to use that copy elsewhere. Below you will see the ads I created for both Amazon and Facebook.

Facebook Ad
Cost: Budgeted $10 per day
Timeframe: September 22-September 26
Audiences: Men and Women ages 18-65 in the U.S. who like books. 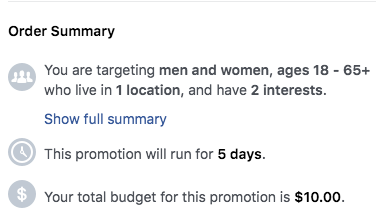 Overall, trying out ad buying was an interesting experience. I’m not sure that it made much of a difference in sales. But, I’m new at this. My Facebook ad received 480 impressions and some clicks. So, I suppose that gets new eyes on my work. Granted, my audience was pretty wide. I might have more success if I narrowed it in a bit. On Amazon, I got 11,768 impressions (plus a few clicks) and that was before I received any reviews. Now that I have at least one review, I’m going to try again and see if I can get a few more clicks than before. People don’t like buying things that don’t have any reviews. So far, I have 1 5-star review. So that’s a start!

The Real World Component
Rather than spend a lot more time focusing on ads, I decided to spend the majority of my time getting my book in more places and myself in front of more people. Withered World is now in the same shop that carries The Green Lady, a place on 39th Street called Noir Arts and Oddities. I seem to have a decent steady flow of sales there. Also, I spent time getting my books up and formatted for Nook and will also be putting them out on IBooks when I have the time.

I’m also hitting the pavement and talking to people and making connections. I’ve been asked by my high school if I would come back and speak to current students (they also featured my first book in the alumni magazine this fall). I plan on connecting with the Advancement officer and making that happen even though the idea of speaking to large groups of people is far from comfortable for me. Plus, I have some connections at a local university (not my alma mater) and a professor there has asked about me coming to speak to their English department students. I’ll do that, too, if the pieces fall into place.

Conclusion
So far, I’ve learned that marketing yourself must be a combination of doing online work (blogging, marketing, advertising, etc.) and IRL work (giving talks, making connections to get my books in stores and shamelessly promoting myself as a writer wherever I go – but not in an annoying or conceited way). How do you strike that balance of wearing all the hats of a self-published author? Please feel free to share your own tips and ideas in the comments!