Perspective is an interesting thing and it’s undeniably valuable in writing. And often when I am experiencing something in life, it causes me to pause and think about my writing. Earlier this week, I got a completely different perspective of Kansas City and I’ve lived in this town practically my whole life.

Yes, on Tuesday an estimated 800,000 people showed up at Union Station to celebrate the Kansas City Royals winning the World Series at the Royals Parade. It’s been 30 years since they’ve won a championship. I was a little over a year old at the time, so of course I have no memory of this event. Tuesday’s event and the winning of the World Series on Sunday were such a big deal that many school districts shut down, businesses were closed and everyone else took the day off. A Blue Snow Day they called it!

Kansas City is a friendly city. Out of town visitors always comment about how kind and helpful people are here. Opposing team fans get recommendations for restaurants they should visit instead of getting jeered at. People will ask them how they’ve enjoyed KC so far. They’re always pleasantly surprised. It’s the Midwest. It’s what we do. And, I might add, there were no violent incidents that occurred during Tuesday’s rally despite the intense traffic, the large numbers of people, the fact that they didn’t plan for this many attendees and we couldn’t hear a damn thing and the high-running emotions.

So how does this have anything to do with writing? Kansas City is a place I know well. I’ve walked the streets (on occasion. You mostly drive here…we aren’t known for public transit). I’ve eaten at hundreds of restaurants. I’ve attended sporting events and concerts and I’ve watched as venues are built, I’ve seen them crumble and I’ve seen them renamed at various times throughout my life. But never have I walked a solid 6 miles, and particularly not through Midtown and down to Union Station.

There are many reasons that I haven’t done this. I don’t go to those areas very often. Sure I go to First Fridays in the Crossroads and down to the West Bottoms for some unique shopping. But I always drive to those places before I walk around them. There’s no way I can walk from where I live down to those areas. It’s just too far. And, as I mentioned, public transit isn’t exactly user-friendly around here.

But, given the circumstances, my boyfriend and I were determined to experience the rally. He picked me up at work at 11 am and we headed down. We parked at about 43rd Street and Warwick and walked all the way up to 25th and Main Street. We perched on the Liberty Memorial. We wandered through the crowds on the grassy hill that slopes down towards Union Station. And then we walked all the way back again. In total, this was more than six miles of walking. That’s a lot for Kansas City, folks. I know all of you who live in pedestrian cities like New York or D.C. will probably shake your head at that paltry distance. But for we Mid-westerners, that’s a long way to go. Even if you work out like I do and are in decent shape. Both my boyfriend and I were exhausted by the time we got back to his car.

Living outside the normal routine of our city and walking like that was fantastic. Even beyond the fact that it was more than 70 degrees in November! This experience gave me an even greater enlightenment about a city I know like the back of my hand. We passed stores and bars I’d never noticed and were able to peek inside the windows as we walked by. We ate lunch which we carried with us from Subway back down by my office. We stopped on the side of the road and sat on a bench at the corner of Westport Road and Main Street. It was then I realized how hilly Kansas City really is! In a car, you don’t notice. But when you’re powering yourself, you really see how big some of those hills are. As we lunched on the side of the road, cars and people streamed passed us.

And oh yes the people! Thousands and thousands and thousands of people walked down the streets and sidewalks. They were all wearing blue. They looked like rivers flowing down the streets. They were rivers that stopped and pooled at the bottom of the final hill at Union Station and awaited the arrival of the players, the coaches and the trophy. It was like something out of a movie. I kept thinking of all the people in the Ghost Busters movie on New Years Eve in NYC and how they flooded the streets. It was a sight to see and I don’t know that I even have the words to describe it to you. On the way back, we walked up the middle of the street which is a novel experience for anyone. Stepping on the lines, your footfalls on the slabs of concrete, the fact that we were moving faster than the cars. It was all so sensory and different! City pride was palpable, though it has been for some time. As a kid, I don’t remember people talking about Kansas City with pride. But now, everyone does. And they did even before we won the World Series. We have t-shirts that spout our pride, we have locally designed and made paraphernalia. It’s fantastic.

The weather and the environment seemed to reflect our excitement and joy. The sky was blue.The sun was warm and people were happy. They high-fived each other, they shouted and cheered, filling the air with their voices and as one giant blob, we moved, walking up the streets, tearing up the pavement with our sneakers and boots and flip-flops (in November!!!).  It was a day that I will remember for the rest of my life.

I learned so much more about my city just by walking those streets this week. We saw really ancient houses that were once the wealthiest homes in the city but now are run down and sadly some of them are boarded up. We saw amazing architecture and walked on pathways I’d never set foot or even driven on as we weaved through the neighborhoods to try to avoid some of the traffic.

My experience on Tuesday changed how I look at my city and it will change how I write about my city too. I do have a couple of stories in my head that I want to write someday soon and they are both set here. The characters live in places like Midtown and Westport and it’s one thing to visit those places, but living there is a mightily different experience and just walking those streets again has flooded my imagination with ideas.

My experience is often limited by the way I travel through KC and where I live and spend most of my time. I love downtown, but I just don’t go there as much as I used to. We’ve moved a bit further south and because I work nearer to the Plaza and downtown, I don’t often feel like backtracking once I get home from work for the day. As for downtown, it’s often still weird to go there because I remember as a child being told never to go downtown because it wasn’t safe. But now people just mill about in places that were thought to be dangerous 15+ years ago. That’s revitalization for you. 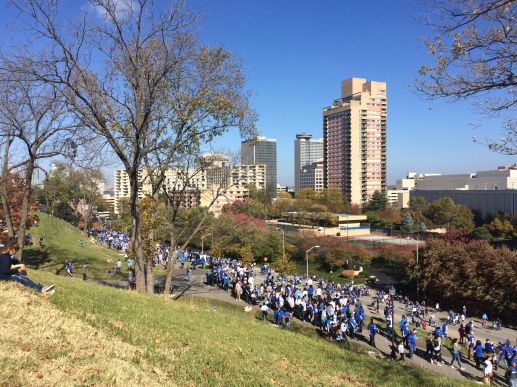 So, back to writing. I have a novel I want to write that is set in Greece. I started trying to write it once but got overwhelmed and I long ago decided that I had to go there before I could actually successfully write it. My experience this week in Kansas City showed me that this is true and was not just an excuse to avoid writing something because I deemed it too hard right then. Even though I know Kansas City really well, experiencing the city in a different way really taught me something about the place I live. Expanding your experience of a place you write about, even when you are writing about an environment you know really well can bring to light some really unique ideas and perspectives.

How do you write about your city or town? How do your experiences there affect your perspective as a writer?