Due to my literature studies background, I love looking back and analyzing trends in the field. Some of you might recall my Monster Culture Series that I wrote a few years ago now, for example. I’ve also written about trends in Dystopian writing and other genres too. These trends can say a lot about what is going on in our collective consciousness and one of the purposes of literature is to serve as a mechanism for writers to make comments about society.

It seems lately that I’ve come across a number of books wherein you will find characters who are able to travel through time or those who exist outside of time. The same can be said for shows popping up on primetime television.

A good place to start would be with H.G. Wells’ famous story The Time Machine published in 1895. In this book, the Traveller (as he is called) can move purposefully through time, though upon embarking on his second journey, he doesn’t seem to return.

Other books that involve time travel in some capacity (and there are many more that I haven’t read of course) include: A Wrinkle in Time, The Time Traveler’s Wife, Outlander, Harry Potter and many more. The interesting thing I’ve noted in the admittedly paltry number of books I’ve read using this trope is the transition from a character using an object to affect his or her movement through time to relying on him or herself.  This leads to my big question following my most recent book club meeting: What does it say about us that our characters have changed from utilizing objects to facilitate their travels through time to that ability being inherent within them?

As is the way with literature, it could be saying many things. But here’s the thread I’ve picked up as I’ve turned this over in my head. Humanity’s fascination with time arguably comes from the fact that it, along with death, is one of the few things that we cannot control (I also must give credit to my book club for the issue of not being able to control death was brought up by someone during out meeting and brought me to the point of considering the issue of time).

One could argue that humanity has always strive to control his/her environment. We have developed science to explain those things around us that used to be inexplicable. We cure numerous diseases, we fix things that are broken, we have touched outer space and the ocean floor; but still we cannot stop time, we cannot reverse it and we cannot keep death at bay forever. 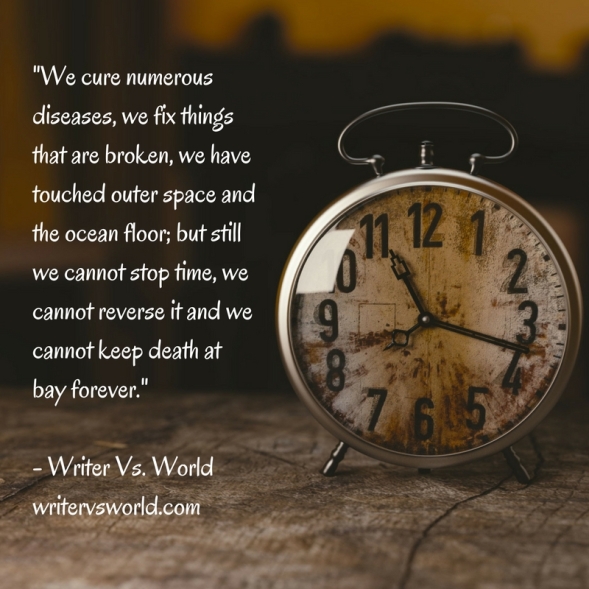 Transitioning the mechanism of time travel into the human body—or even into the very DNA of a person as you get with Henry in The Time Traveler’s Wife—suggests a desire for control, but still there is an element of waywardness. We move from being the builder of this technology to the capability being inherent within us. But embedded in that is also a warning. Henry’s ability to time travel is also identified as a DNA disorder and he lacks control over his travels which suggests an inability to truly control those delinquent threads. Henry’s path is fraught with dangers from the elements and his fellow human beings who do not understand his plight. And yet, there is hope. In the birth of Clare and Henry’s child, Alba, who seems to progress the “Chrono-Impairment” and has more control over her travels than her father. So perhaps we can still adapt and progress.

Time travel as a literary device is an interesting concept. It pervades a number of genres, from science fiction and fantasy to romance and has even made prominent appearances on the big screen. As a writer, the prospect of jumping in and out of time is a bit intimidating. Not only do you have to propose your own theory for how time travel best works, but you also have to have working knowledge of the various periods your characters travel to (or at least make the world robust enough that your audience accepts what you’re telling them.)

As a reader, I love to delve into the world an author creates and learn the ins and outs of the rules of that universe. I also like to think about the positives and negatives to the special skills, abilities and powers that authors give to their characters. Would I want to be able to time travel if it meant that I always materialized naked and couldn’t control where I went? And what does that say about me if I would or would not? What does it say about you?