Society doesn’t hesitate to tell a woman how to act, how to dress, how to look and how to be. You’re either a bitch or a sweetheart and there’s little room for anything in between, and little tolerance for anything but nice. Despite the fact that we are surrounded by expectation and critique that generally falls within a very narrow framework, literature has been a place where the dynamics of what it means to be a woman is far wider-ranging than the real world.

Fantasy novels have been filled with bad ass women for decades. But, in the past few years, a new breed of woman seems to have come to pass. These women don’t care what others think of them. They’re not boyish per se, but my former tomboy self would have loved them for their fighting skills and the fact that they don’t give a damn about what others think. These tough women stop at nothing to get what they want and are paving a new wave in literary trends.

Lately I’ve hopped back on the Fantasy reading bandwagon and have practically inhaled everything I can find written by Jay Kristoff. The two heroines from his series, The Lotus Wars and Nevernight, Yukiko and Mia, are both bad ass women. They have an attitude. They curse a lot. They are handy with a knife (and other weapons) and they don’t let anything stand in their way. They’re both also teenagers.

As I wait eagerly for the third installment of the Nevernight story to come out this fall, I’ve picked up Artemis, the most recent release from The Martian writer, Andy Weir. It stars Jazz, another bad ass, sharp-tongued young woman who isn’t afraid to break laws to get what she wants (Note: I’m not finished reading this book yet, so I don’t know how things wind up). 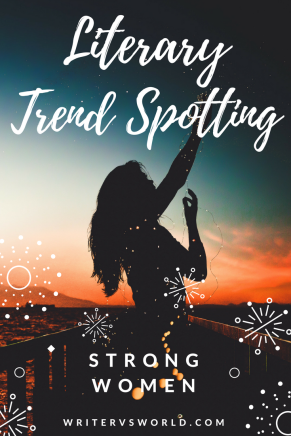 Attention was brought back to the heroine with the advent of the Dystopian and Post Apocalyptic novel trends, particularly in the YA realm. The majority of these stories begin with a Gothic literature hallmark: the upset or shattering of the family dynamic. A young heroine is separated from her family, an orphan or the victim of  an evil relative or person in power. The character is set on revenge or survival and ultimately leads an uprising – this differs from the realm of the Gothic where a female character typically lacks agency.

Mia, Yukiko and Jazz differ from young women of the Dystopian/post apocalyptic novels in a few ways. Though these heroines are all in their teens, the ones I’m reading lately lack the teenage angst that can be such a turnoff for older readers. There are fewer love triangles too. You get the slightest hint if one in Kristoff’s The Lotus Wars, but there won’t be any Team A against Team B business as you get with other YA stories.

Another thing that intrigues me about this trend is the fact that these strong female characters are all written by male authors (at least the ones I’ve been reading lately). Generally, we’re told to write what we know, hence, you wind up with female writers creating heroines and male writers creating heroes. Writing across gender is tough. I’ve tried it myself! These authors create complex female characters that read true to someone who is a female reader. Very cool.

As for myself, I have not yet mastered the art of creating a sharp-tongued female heroine who is still interesting and able to create strong relationships in a way that the audience finds believable. These new archetypes are inspiring and ones that I hope to be able to emulate as I move forward.

My own heroine, a woman who scales a little older than the heroines I’ve just discussed, is an artist-turned-warrior, though not of her own volition. After her brother’s death, she was recruited to fill his empty slot in an elite force of flying warriors who wear mechanical wings affixed to their backs, called Aviators. She’s not a vengeful heart and lives in a relatively peaceful world, so there is not really a need for her to be the harsh femme that these other female characters grow into.

That being said, she does have things to be angry about: Her life was thrown off-course because of the “invitation” to join the Aviators. She’d spent the majority of her life training to become the next Master Sculptor, an artist and craftswoman who works with clay in their city and someone who is renowned throughout the country. But the invitation to join the Aviators is one that she was not allowed to refuse, so she had to relinquish her apprenticeship. Additionally, she has lost her brother and as she was going through training, she was purposefully disfigured by a superior officer and now bears an ugly scar down the side of her face.

There’s definitely a lot to work with, but at the same time, it’s clear that my heroine does care what others think. She believes that she couldn’t turn down the invitation to join the Aviators, as do the majority of the people around her. But could she have actually done so if she wanted? Probably. So, there’s a bit of a difference in her attitude than the other women I’ve been reading about.

Sometime, I’d love to create a character that lives within the same realm as these women I’ve been reading about lately. They are the change-makers. And it’s women like them in the real world who will make a difference and lead the charge for all of us!

What new or unique qualities have popped up repeatedly in your reading lately? Please share your thoughts in the comments!