When you think of a writer’s voice, you think of them in terms of the written word. Not their speaking voice. Today, we can listen to books being read on Audible by the authors who wrote them or recordings of them reading their poems can be found in various nooks and crannies on the internet. But, when you start talking about authors before a certain time period, you are left without the opportunity for this intimate experience.

Last weekend, I attended the annual birthday party for Edgar Allan Poe hosted by one of my favorite local shops Noir Arts and Oddities (the party was a little late this year due to a weather postponement). Noir is a KC destination that is not only a store, but also a community! The shop carries my books, as well as the artwork and prints of several local lettering artists and artisans, and is owned by a friend of mine. But what they’re really known for is their collectibles, a host of highly curated items that embody the curious, the obscure and the weird. And it’s all AMAZING! In 2018, the shop expanded and relocated to the West Bottoms, a highly sought after shopping district in a very old part of the city.

I attend the annual Poe birthday party every year and it has gotten bigger and better each time! Poe’s 210th birthday party featured readings of Poe’s work, cake, cookies, shopping and a special visit from Poe himself. The actor who plays Poe is quirky and fun and he takes his impersonation seriously. At the party, Noir’s owner, the actor playing Poe and I got into a really interesting conversation. They consider me to be their Poe expert (which is really kind of them!), so they asked me what did Poe’s actual speaking voice sound like. 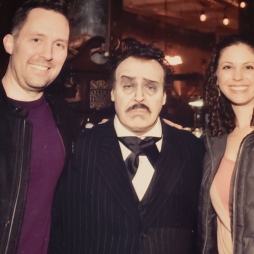 I paused. In all my studies, Poe’s speaking voice is not something I had ever considered or wondered about. And I absolutely should have. Poe was in the public, doing readings and teaching. But, I’ve never thought about things from the perspective of an actor trying to embody the essence of a person. It struck me as being similar to the struggle I face as a writer when I try to write about real people (as I will be doing in my Sappho novel).

Luckily for Poe, there are quotations that discuss his demeanor and describe his tone so we can get an idea of his air and his temperament. But, what my friends at Noir were really getting at is did he have a northeastern accent? Did he sound like a Bostonian? Did he sound like a Southerner?

This is really hard to pin down. Poe died in 1849. A quick Google search informed me that the first sound recording wasn’t made until 1860 on something called a phonautograph. The first recorded sound was voice of a woman singing “Au Clair de la Lune” (in case you were curious). So, we’re out of luck in that department. But this isn’t the only issue. Poe was born in Virginia and lived all up and down the East coast. He would have had Southern influences and Baltimore and a host of other places. So, knowing what he really sounded like is likely impossible.

Even though we can’t pin down how Poe formed his vowels, we were able to find some information thanks to the Edgar Allan Poe Society of Baltimore. Here is how one person who may have experienced Poe in person described his voice: “His voice was soft, mellow, melodius, and rather more flexible than powerful. It was as musical as Apollo’s Lute. . . . When he read Poetry, his voice rolled over the rhythm of the verse like silver notes over golden sands — rather monotonously and flute-like — so that, it may be said that he rather cantilated than read.” And there are lots more on their page if you’re curious. The above link also has a host of other quotations describing Poe’s face, figure, eyes, hair and clothing. It’s really cool to be able to read real life commentary about how Poe looked.

No matter how much you know about a subject, there’s always more to be discovered. I was reminded of this over the weekend as I discussed Poe with my friends at the party.

Additionally, this conversation gave me something else to think about. When I develop my own characters, I should also be thinking about how a character’s voice sounds when he or she speaks. Yes, you can describe a lot with body language and such. But, what does a character’s voice really sound like? Do they have an accent or a lisp or some other verbal quirk? This is just another way to deepen a character, reveal more about who they are and thus adhere your reader more closely to them. Happy writing!