So, my first convention was a success! I was a little worried about going to ConQuesT 48 because it’s a science fiction/fantasy convention and my fantasy book wasn’t coming out before convention weekend like I had originally hoped (I’m shooting for a September 1 release date); and what business does a historical fiction writer have being at a genre fiction event?

It turns out, quite a bit thanks to my background in Gothic literature!

I only did one panel this year, as I mentioned last week. I just wanted to test the waters and see if paneling at a convention could be a good way to network and put my own writing out there. When I finally looked up my fellow panelists for the Evolution of the Zombie panel, I learned that I was partnered up with one of the convention toastmasters, Jonathan Maberry, a New York Times best-selling author and 5x Bram Stoker Award winner. Cue some serious nerves!

Worried that there wouldn’t be a place at the table for my perspective regarding the history of these genres and the origins of the zombie story in particular, I was concerned that I wouldn’t have much to contribute to the conversation. It turns out I was very wrong!

With some friendly buddies in the audience who helped by asking questions about the origins of zombies in British literature, and a very kind and encouraging toastmaster who could talk the gambit – from ancient origins to modern iterations – we had a really fantastic conversation worthy of any self-respecting English major who loves a good literary analysis session!

Given that my experience with these stories tends to end after H.P. Lovecraft, I don’t have a lot of perspective on modern stories. I certainly learned a lot myself AND picked up some tips about some really fun reads that I’ll need to snag for my own personal bookshelf.

With that, I’d say my first convention paneling experience was definitely an A+ and I’ll definitely be back next year. And maybe, I’ll try to find some other local conventions to participate in once Withered World releases later this summer. Cheers! 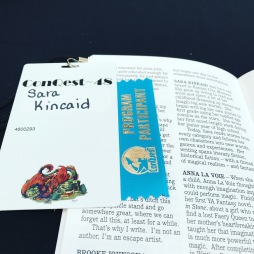 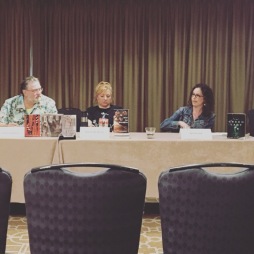 Feel free to check out some of my posts about monsters (zombies, werewolves, vampires) from my Monster Culture series published a while back. Or, you might also be interested in my analysis of how Gothic literature influences YA literature and my Nerd Nite lecture from 2013.